Please read this article and donate.

A Car Accident Throws a Productive Life Into Turmoil 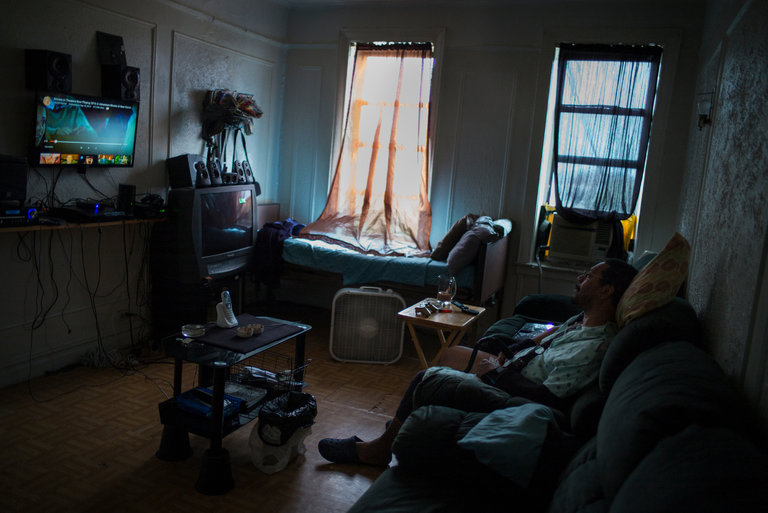 David Nublett, 57, who uses a wheelchair, a walker and a cane to get around, in his fourth-floor walk-up apartment in the Bronx. CreditÁngel Franco/The New York Times

Fresh from a promising meeting with a real estate agent, David Nublett was on his way to treat himself to a new pair of shoes when he started to walk across Westchester Avenue in the Bronx.

That is the last thing he remembers.

Mr. Nublett later woke up in a state of delirium at a hospital. Tubes were inside him. A doctor was snapping his left shoulder back into joint; another told him if they did not perform emergency surgery to remove his spleen, he could die.

“You wake up and they’re ready to cut you open,” Mr. Nublett recalled, his voice strained. “It’s like ‘The Twilight Zone.’”

He was struck by a car that morning in February 2012. He spent the next two months at Jacobi Medical Center in the Bronx. Years later, after multiple surgeries, Mr. Nublett, 57, still has five pins in his shoulder, a metal plate in his ribs and a shattered left knee. He struggles to walk. He has developed high blood pressure, diabetes and severe anxiety.

“I shouldn’t be here,” Mr. Nublett said, an anguished refrain he often repeated.

Before the accident, Mr. Nublett worked two jobs, in maintenance and in security. He was self-sufficient and frugal. Now he cannot work at all. Mr. Nublett said the driver’s liability insurance covered his medical bills, but left him with no compensation to make up for what has become years of lost wages.

The catastrophe not only stripped him of his mobility and independence, but also decimated his life savings.

“I have to start all over again, like a baby,” he said.

His monthly income consists of $987 a month in Social Security disability, enough to cover the rent for his Bronx apartment. He also receives $194 in food stamps. Desperation compelled him to beg strangers for help.

After falling $3,589.40 behind in rent, he turned to Catholic Charities of the Archdiocese of New York, one of the eight organizations supported by The New York Times’s Neediest Cases Fund. Catholic Charities worked with other groups to cover his arrears. They used $347 in Neediest Cases money to buy Mr. Nublett a kitchen table, chairs, a dresser and a medicine cabinet to help him organize and thrive in his apartment, which he can rarely leave.

Mr. Nublett, who uses a wheelchair, a walker and a cane to get around, lives in a fourth-floor walk-up apartment. Venturing outside is an exhausting, painstaking process. He does so only to see doctors or physical therapists.

“I got to sit here and watch TV all day with a pillow behind my head like some old dude,” he said.

Catholic Charities has applied for a rent-increase exemption and is trying to secure him a ground-floor apartment in his building.

Independent journalism.
More essential than ever.

Mr. Nublett’s physical ailments keep him inside, which only worsens the psychological pain of confinement, he said. He has few ways to keep from dwelling on his misfortune and the inequity of having his life change so radically. Conventional forms of escapism do nothing for him.

“Music soothes the savage beast or whatever,” Mr. Nublett said. “But when you listen, you just think about what you’re going through.”

Friends have fallen away, visiting much less and looking at him with pity when they do, he said. No family members live in New York State. Other close family members are deceased. His neighbors are friendly, he said, but have not helped him navigate his new life. His only consistent companion is his home health care aide.

The medication Mr. Nublett sometimes takes for his anxiety makes him drowsy. He has grown accustomed to that state of consciousness at times, mentally drifting away and pondering the unanswerable question, “Why me?”

“The only bad things I did was curse, and we all do that when the game comes on,” Mr. Nublett said.

He has always followed rules and adhered to a rigid code of right and wrong, taught to him by his mother and his faith. But now, Mr. Nublett struggles to understand the feeling of being inexplicably punished.

Additional surgeries are pending, including for a replacement for his left knee. Mr. Nublett is praying that he will be able to get back on his feet at long last.

“I want to go back outside again and cross the street,” Mr. Nublett said. “I want to catch a train again, sit down and have a bite to eat. Go to work like everybody else.”

That is where he should be, he said. Not taking pills, receiving injections and fending off panic attacks. Not fighting loneliness and despair, as he spends every day on the couch.

He should not be here.

You need to be a member of VAMOS to add comments!

This reply was deleted.
1999-2016.ALL RIGHTS RESERVED. VAMOS and VAMOS ONLINE are Trademarks of Amazon Sun LLC.